coming back after losing touch 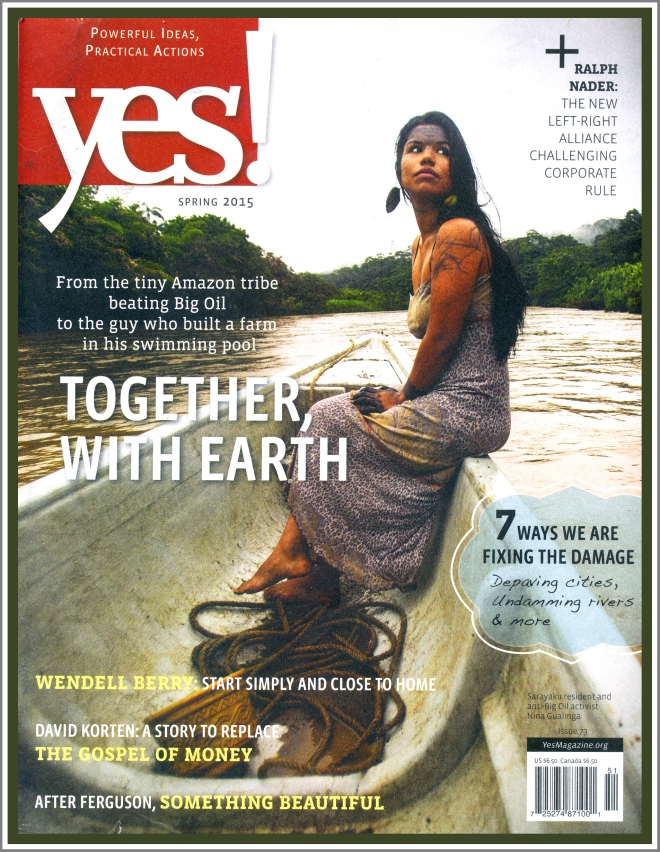 So-called modern progress has depended on exploiting the Earth’s resources as if they had no end. We’ve lost touch with the ancient wisdom that we are partners with Earth and all life on it. But we’re approaching a moment when enough of us reclaim our sacred connection with Earth to give us a chance to save a dying planet.

Wisdom-keepers, United – by Jennifer Browdy, photos by Jane Feldman
when the grandmothers awoke

Fight For Life – by David Goodman
deep in the amazon, a tiny tribe is beating big oil

Alternative Grammar: A New Language of Kinship – by Robin Kimmerer
a new word for “it” to heal our relationship with mother earth

HOME: has to be the definitive statement on global warming. thank you YANN ARTHUS-BERTRAND & team. and thanks julia mader of RASAYANA COVE our unique healing ashram here in florida who finally just brought the placid-shattering documentary to my attention during a recent retreat.

after watching this preview click HERE to to take in the full 1.5-hour extravaganza. if you’re like me, it’ll take you more than a single sitting to take it all in. i advise you give it all the time it’s asking. and need i add, it’s best @ full-resolution, full-screen, and turn up those ancillary speakers!

going on 3 yrs now since its release; where’ve i been??

devastating, of course, but doesn’t just leave you there; simply too late to be a pessimist! as they put it. music – aerials – narration – silences all of highest caliber and orchestration together, nothing less than what our miraculous, embattled mother planet deserves. ties in everything you’ve already heard about our number one global crisis- and then some! talk about moved by mother!

the film appeared on june 5, 2009, world environment day, the first film ever to be released simultaneously in theaters – on tv – dvd – internet, free in 5 continents and 14 languages, the director giving up all copyright rights. YOU’LL WANT TO READ THE FILM’S WIKIPEDIA ENTRY