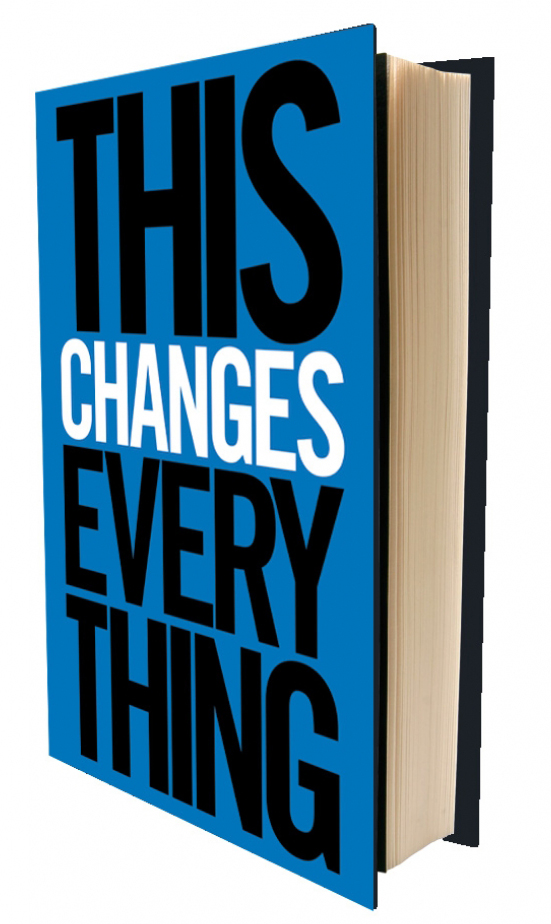 THIS CHANGES EVERYTHING
Capitalism vs The Climate
by Naomi Klein

Gotta apologize, friends of Ma, outta here this long. Can’t let it go any longer. Much of these days for wifeling, helping her recover from deep surgery. Deeper than ever we saw coming.

No, can’t leave my readers alone, having just finished Naomi’s latest –One Great Work– page by page since Sept’s Peoples Climate March, ideally released just then. Powerful, humanly – scientifically – masterly gathered. How ’bout you ? Read it by now yourself, shemovesme friend ? Hope so. If not, do get right to it. You’ll soon know why.

Wifeling hears me go on & on about the book, concluding author must be something like another Rachel Carson. Clearly Rachel herself would be cheering. Naomi’s husband Avi Lewis is making TCE into a movie. Bravo, does it ever deserve it ! But please, reader, don’t wait for it.

No, no other words for it -for what we’re facing on this beautiful planet: TCE adds up to my most basic + my most advanced education for our Ma. Last few days I’m mulling just how to write it up . . . where to start, my pages & pages of underscoring nearly as many as Naomi’s originals. Seems I’m not alone at such a pen juncture. Rob Nixon started out with a similar baffle – here’s his own NY TIMES REVIEW 11/6/14

While we’re at it, if you’re looking for more reading clues, click here for another fine interview – bk review – auth review – pub excerpt at YES MAGAZINE – THE GUARDIAN – THE NATION – SIMON & SCHUSTER

OK back to those pages, perhaps now far enuf away to begin hearing what sticks ( as if this aging memory of mine has anything like a last word ! )

First off, Naomi, it’s your sharp, energetic, forceful approach, creatively aligned for the best of reader engagement. I’m right with you from page one. You do get right to it, those first pages blatantly topside vs. easing your way up any ladder of speel for our planet.

We need a Marshall Plan for the Earth
– p 12

This well known target ( of world climate meetings ) has more to do with minimizing economic disruption than with protecting the greatest number of people.
– p 20

Before long, it’s so evident – what a journalist ! Your research – your energy – such non-stop probing, all taking us to the very source of Ma’s debacle – unfettered corporate ideology of the market. Oh my gosh, our turn to lose what we thought we’d won in that long, cool thrash of communism so-called vs democracy so-called.

Climate change detonates the ideological scaffolding on which contemporary conservatism rests. A belief system that vilifies collective action and declares war on all corporate regulation and all things public simply cannot be reconciled with a problem that demands collective action on an unprecedented scale and a dramatic reigning in of the market forces that are largely responsible for creating and deepening the crisis.
– p 48

Talk about those corp deniers. You go right to it – to them, starting your book in person at their very conference. Then to the very ones -who doesn’t think so- right with us, the biggest of our environmental friends, their size attributable -wow- to those same fossil giants.

The Nature Conservancy has been in the oil and gas business ( itself ) for a decade and a half. That this could happen in the age of climate change points to a painful reality behind the environmental movement’s catastrophic failure to effectively battle the economic interests behind our soaring emissions: large parts of the movement aren’t actually fighting those interests -they have merged with them.
– p 208

But nowhere is it about anything like hate, as my own lens knows so well, this most authentic movement for our mother. It comes from the most natural love of her beauty, you two remind us . . .

I believe that the more clearly we can focus our attention on the wonders and realities of the universe about us, the less taste we shall have for destruction.
– quoting Rachel Carson herself ( 1954 ); TCE p 355

And speaking of our mother and what’s most authentic, the one time you seem to abandon a journalistic stand-off here you are connecting our planet’s fertility mission to your very own !

Finally what sticks is who you tab as earth’s best activists, known in your land as America’s first-nation folk, not only for their most natural affinity to our mother, but -admittedly most surprisingly- for such very real leadership from taking on their own land debacles to exiting courtrooms the winners. No wonder they were the very ones leading the rest of us down Broadway.

These victories add up: they have kept unaccountable millions of tons of carbon and other greenhouse gases out of the atmosphere. Whether or not climate change has been a primary motivator, the local movements behind them deserve to be recognized as unsung carbon keepers, who, by protecting their beloved forests, mountains, rivers, and coastlines, are helping to protect all of us.
– p 371

Naomi, I have to say in these final days of mine, presence at last is taking over. Here maine-coon Abby nestles beside me, dawn by smiling dawn, life itself so brightly in place, past any clouded yesterday. So it needs be.

I’ve always looked to Canada as America’s grounded northern conscience. Now, even as tarsands pulls your country down our lowest of corp undertakings, here you bring us home

to what’s happening, gifted planetwise;
to what’s so needed for our here & now.

. . . if ever you doubted her growing sweaty

NASA animation depicting warming global temperatures, 1880 to 2014
( click on youtube logo on their screen above for pub details )

and here it is, 2014 – hottest year of them all
read BRIAN KAHN’S FULL ARTICLE ON CLIMATECENTRAL via NASA & NOAA 1/16/15 release 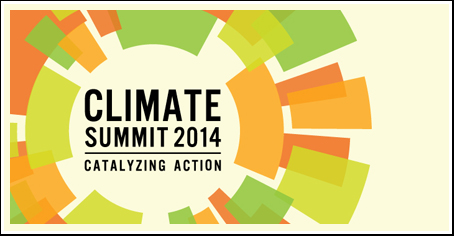 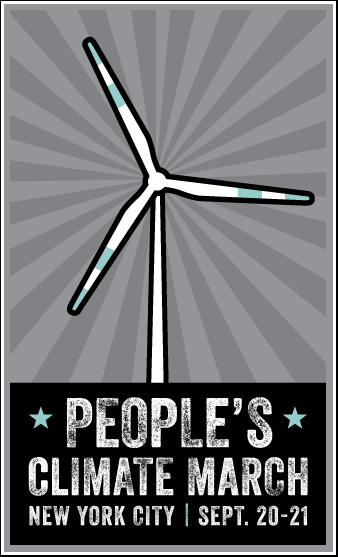 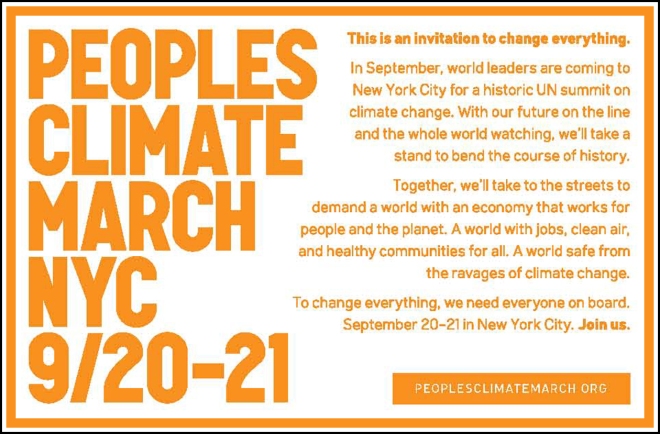 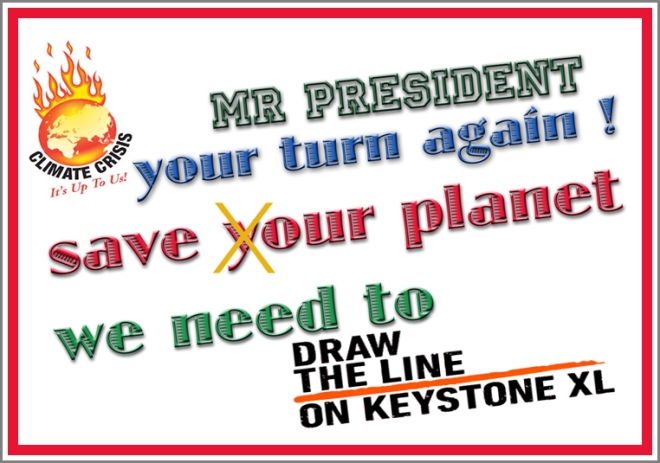 ma, numbers of us in north america came together last night
to remind him of those so very fluent promises for your needs & ours
numbers of your loyal folk discovered one another here in orlando

all of us called to draw the line on filthy tar sands oil
its shattering impact on air-land-water, threatening movement across our land
past everything disastrous we’ve come to learn from life based on fossil fuel

time at last to move forward with saving mother planet
we need to get together at last, find a new way to live here
thanks to joining hands example & hard work set by these family members

Welcome back to Democracy Now! You’re just coming from Cooper Union last night, where the place was packed, this historic building where President Lincoln spoke—talking about what?

BILL McKIBBEN: Well, talking about this burgeoning divestment movement. It’s been kind of amazing to watch in the last six weeks as the number of campuses has mushroomed to the point—at 234 campuses now. The Nation said last week that this may be the largest student movement in several decades. In one sense, it came very quickly out of nowhere. In another sense, you know, last year was the hottest year we’ve ever seen in America. We watched the drought, we watched Sandy. I think it’s no surprise, really, that young people are starting to say, “We’ve got to spend another 60, 70 years on this planet. We better do something fast.” And that something means standing up to the fossil fuel industry that’s been in the way of rational change for a quarter-century now.

AMY GOODMAN: What do mean by divest from fossil fuel companies? Which companies are you targeting?

BILL McKIBBEN: We have a list of 200 companies with the largest carbon reserves in the world. The argument that was in that Rolling Stone piece, and in a sort of tour that we did around the country all fall about it, was that these companies now have—this industry has five times as much carbon in its reserves as the most conservative scientists on earth says would be safe to burn. Once you know the numbers, there’s no longer any sort of doubt about how this story comes out: Unless we rewrite the script, if we follow their business plan, the planet tanks.

That’s why there is this upsurge, not only around divestment, but around things like the fight against the Keystone pipeline. You know, we’re going back to Washington for the biggest climate rally probably ever in this country a week from Sunday on the Mall in D.C. It’s—it’s coming up fast, and it’s got to come up fast, this movement, because unlike other problems we face, there’s a time limit on this one. If we don’t get it right soon, then we don’t get it right at all.

AMY GOODMAN: What’s Obama going to do around Keystone XL? He put off the decision, said he would put it off ’til after the election. That’s come. He said now spring. What do you believe will happen?

BILL McKIBBEN: I believe what will happen will depend entirely on what kind of movement we build. My sense of Washington is that when you push, sometimes things happen. It took 1,253 people going to jail, the largest civil disobedience action in 30 years, to slow down this northern portion of the Keystone pipeline. It’s going to take a real effort to stop it. But that real effort is being made by people in all 50 states and by our brothers and sisters in Canada. It’s been exciting to watch over these last 15 months. Something’s building. I’m not certain that it’s building fast enough to catch up with the physics of climate change. But watching those campuses, watching those kids, it’s awfully exciting.

AARON MATÉ: So, Obama has now delayed his decision twice. Do you think that’s linked to these protests that you’ve been involved in?

BILL McKIBBEN: I think everyone—as Van Jones said the other day, this was a done deal 18 months ago. We’ve managed to make it come undone for a while and, in the process, kept 400 million barrels of oil in the ground that would otherwise have gone out. So, that’s, you know, worth going to jail for, but it’s not going to stop global warming. We’ve actually got to start leaving carbon permanently in the ground.

AMY GOODMAN: We only have 10 seconds. What’s the plan for February 17th, this rally in Washington?

BILL McKIBBEN: It’s going to be exciting. And if you go to “forward on climate [6],” you’ll find out all the logistical details.

AMY GOODMAN: Bill McKibben, I want to thank you for being with us, co-founder and director of 350.org [4], author of Eaarth: Making a Life on a Tough New Planet.

and to think numbers of us have been looking to you

CANADA FIRST NATION TO PULL OUT OF KYOTO PROTOCOL

in so many words, there you have it: thanks bill!
that jail time is the better part of this argument . . .