. . .  here taking a teen-ager, wide-awake,
taking us all into what’s next for our mother earth 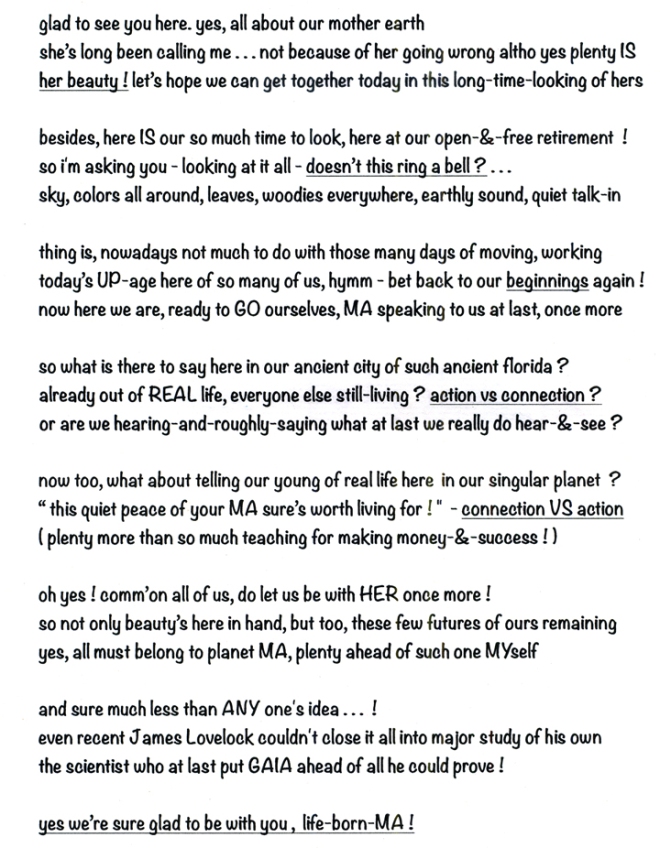 not just government reps, big govs at that
. . . no, ASK EVERYONE –

I’ve just returned from Paris, where exhausted delegates from 195 countries AGREED ON THE FIRST EVER UNIVERSAL DEAL ON CLIMATE CHANGE.

There was no end of superlatives for the Paris Agreement. It would be a turning point in human history, transformative, momentous, historical, according to François Hollande, Ban Ki-Moon, Al Gore and the many other dignitaries in the French capital.

The deal would be a game-changer and redefine future economic development, Jim Yong Kim, the World Bank president TOLD MY COLLEAGUE FIONA HARVEY.

The atmosphere at COP21, where the deal was struck after several sleepless days and last minute haggling over a verb in the 31-page text, was unprecedented in two decades of climate talks, according to veterans of the negotiations.

When Laurent Fabius, the French foreign minister and president of the talks, announced the deal’s adoption and brought down his leaf-shaped gavel, the halls of the summit erupted with applause. UN and French officials LAUGHED, HUGGED, HELD HANDS ALOFT ON STAGE AND GAVE THUMBS-UP TO THE CROWD. EVEN JOURNALISTS CLAPPED.

Not everyone thinks the deal goes far enough, and the carbon curbs it’s linked to are entirely voluntary. But, AS BARACK OBAMA PUT IT, the Paris Agreement is the ” best chance ” we have of stopping dangerous global warming.

*__HOW THE DEAL WAS DONE

*__THE GUARDIAN VIEW ON THE DEAL

we load the streets of paris for ma

Today is a historic day: as tens of thousands of people filled the streets of Paris, politicians finalized a major new global climate agreement.

The deal in Paris includes an agreement to limit global warming to below 2 degrees Celsius, with an aim of 1.5 degrees, and achieve climate ‘neutrality’ that will require phasing out fossil fuels soon after mid-century. That’s not what we hoped for, but it’s still a deal that sends a signal that it’s time to keep fossil fuels in the ground, and for investors to cut their ties with coal, oil and gas by divesting.

This deal represents important progress — but progress alone is not our goal. Our goal is a just and livable planet.

If followed to the letter, the agreement leaves far too many people exposed to the violence of rising seas, stronger storms and deeper drought. It leaves too many loopholes to avoid serious action — despite the heroic efforts from leaders of vulnerable nations and communities who fought for a deal in line with science.

But the coal, oil and gas corporations of the world should take little comfort. That 2 degree pledge would require keeping 80% of the world’s remaining fossil fuels underground, a 1.5 degree target even more — and countries are required to come back to the table every 5 years to increase their ambition in reaching those goals.

Paris isn’t the end of the story, but a conclusion of a particular chapter. Now, it’s up to us to strengthen these promises, make sure they are kept, and then accelerate the transition away from fossil fuels and towards 100% renewable energy.

AS WORLD LEADERS IN PARIS WERE FINALIZING THE TEXT OF THE DEAL, THOUSANDS OF PEOPLE RETURNED TO THE STREETS OF PARIS TO DEMONSTRATE THEIR COMMITMENT TO CONTINUE THE FIGHT:

They were joined by hundreds of solidarity actions around the world, all echoing the same message: it’s up to us to keep fossil fuels in the ground.

Standing together, flowers in hand, we formed red lines in the street — because lines have to be drawn in this fight for justice, and it’s up to all of us to stand on the side of those on the front lines of this crisis.

More lines are being drawn everywhere against the true villain of the last two weeks: the fossil fuel industry, which has done everything possible to weaken even this late, late deal.

Without pressure from ordinary people, world leaders would have gladly ignored this problem entirely. It’s pressure from people that will close the gap between WHAT WAS SIGNED TODAY AND THE ACTION WE NEED.

This begins the next chapter. Please watch this space for the announcement of something big in the coming days!

If you are reading this, you’ve been part of the work that got us all to this point, and for that, we say thank you. 2015 was a historic year for us — because we worked together to build a more powerful and hopeful climate movement.

With gratitude, and as always, hope,

May and the whole 350.org team

The endgame approaches. Negotiators at the UN climate talks in Paris now have just hours left to find a global consensus on a new climate change deal. Despite the REMAINING STICKING POINTS the mood is still upbeat for a deal. The UN Secretary General Ban Ki-Moon said on Friday that he was “ENCOURAGED” BY PROGRESS.

” I have been attending many difficult multilateral negotiations, but by any standard, this negotiation is most complicated, most difficult, but most important for humanity . . . I am urging and appealing to all the state parties to take the final decision for humanity. ”

Our team of reporters at the summit are feeding into a live blog which will run throughout today. You can READ LIVE UPDATES HERE.

*__VIDEO: THE AMAZONIAN TRIBESPEOPLE WHO SAILED DOWN THE SEINE

*__PODCAST: CLIMATE TALKS TURN UP THE HEAT ON WORLD LEADERS

It is crunch time in the UN climate talks in Paris. We had the diplomats wrangling last week but now the politicians have taken up the baton and with only the next day and a half to go, countries are going to have to make their mind up what they want and what they are prepared to sacrifice.

On Wednesday afternoon THE FRENCH HOSTS PUBLISHED A DRAFT OF THE FINAL NEGOTIATING TEXT. It’s a bit shorter, there are many fewer brackets ( points of disagreement that are still unresolved ), but all the core sticking points remain unresolved. Last night the countries met in plenary to give their reactions, and today there will have to be movement if there is to be a deal.

The good news, especially for poor countries, is that the new text now includes the figure of 1.5C as one of three options for a target rise in temperatures ( THIS PIECE BY MY COLLEAGUE ADAM VAUGHAN explains what impacts are likely to be associated with each extra degree of rise ). The other options of ” 2C ” and ” under 2C ” are still there but it does suggest that the pressure put on countries by development groups, churches, the media and others to be ambitious has paid off. It’s another matter whether that is the final figure agreed.

Finance to help poorer countries to adapt to climate change will be a major issue and the text recognizes the $100bn figure promised by 2020, but indicates that this is just a starting point. Although no ongoing figure is given.

Equally, the thorny issue of loss and damage ( what some poor countries see as compensation for climate impacts ) is in the text but with no new language around it. That probably means that no-one is prepared to compromise yet.

As I write this around 400 people from environment and development groups are inside the centre demonstrating that they want countries to be ambitious. The cry is ” 1.5 to stay alive “.

The next 24 hours will decide if there is to be a deal. There will have to be compromises made but by lunchtime we should have the bones of a final agreement. Then there will be long plenary sessions, possibly another text, and a deal possibly on Friday night or Saturday morning.

It could all go wrong but the mood here is positive. Whether they can now find a way through the labyrinth of alternatives and brackets is another matter.

*__DELEGATES WARN OF FLAWS IN AMBITIOUS PROPOSALS FOR DEAL

*__MARCH TOWARDS A GREEN FUTURE LIKE TERMINATOR, SAYS ARNOLD SCHWARZENEGGER

Here in Paris, negotiators are feeling the heat. As the conference enters its final crucial week, ministers are arriving, greeted by young volunteers from local neighborhoods, electrified transport and recycled art.

Negotiators were working into the early hours over the weekend to produce a 48 page draft agreement. Published on Saturday, it was 252 pages shorter than at this point during the disastrous Copenhagen talks in 2009. But within the agreement lie more than 900 square brackets, signifying areas of disagreement.

Laurent Fabius, president of COP21 and the French foreign minister, summed up the challenge ahead:

” We’re talking about life itself . . . I intend to muster the experience of my entire life to the service of success for next Friday, ” he told the conference.

But many developing countries are now worried about parts of the agreement, which they say could put pressure on them to provide climate finance, alongside rich nations. Some even say that the text is an attempt to change the UN’s convention itself.

So can the negotiators find the right compromises, delete the brackets and come to a consensus by 6pm on Friday ?

We’ll be here to find out.

With hope,
Emma Howard and the Guardian team in Paris

*__THE KEY PLAYERS AT THE CLIMATE PARIS SUMMIT